15 Simple Tips For Networking Your Way to Career Success 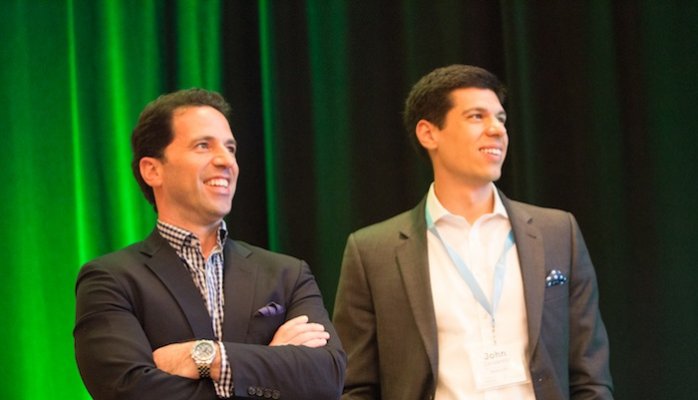 In January, Forbes contributor and fellow YEC member Michael Simmons uncovered the number 1 predictor of career success. According to network science, the predictor is that you must be in an open network. He points to Steve Jobs as one of the most networked entrepreneurs in history. While this is great news for extroverts, it’s clear that if you’re an introvert, you may have a lot more challenges networking.

To be clear, I don’t think you need to be an extrovert to have an open network. I’ve even given specific tips about how introverts can build a personal brand on YEC’s Start up lab. Introverts can leverage technology to create a solid network. Whether it is via blogging, tweeting, or contributing to articles. I’m a huge advocate for all those tactics.

But if you’re more introverted, how do you build a large open network- one where you are an important link between people from different clusters? How can both introverts and extroverts migrate their intellect and expertise into the real world?

Instead of speculating, I went to an expert. Recently, my friend Chris Dessi, CEO of Silverback Social, asked me to keynote his upcoming event the Westchester Digital Summit. His team has hosted thousands of attendees and seen speakers from Facebook, Google, Pinterest, Linkedin, GE and Mastercard, to name a few. He’s seen it all. While discussing the summit, we got to chat about some of his compelling tips he has for introverts to better network. I think these tips are valuable for everyone! This is what Chris shared:

1. Build context in advance. Start the networking from the safety of your office in advance. Peruse the website of the event. Seek out speakers and attendees via social media. Follow them on Twitter or LinkedIn, engage with their content, and build context and rapport with them before you meet them in person. People tend to say content is king – I think context is. Now when you see someone walking past you at the event you may remember him or her from his or her Twitter avatar. Now you have something to talk about, and it will feel like you’re meeting an old friend. Just don’t assume they know who you are. Always introduce yourself.

2. Go alone. I promise you it works. I’ve seen people who show up together, and don’t leave each other’s side the entire event. This is a huge mistake. You may scare off potential introductions with your clique. Remember there are other introverts and your little crew will intimidate them. Show up alone, and challenge yourself to seek out others who are alone. They’ll thank you for approaching them.

3. Put away your phone. Being present is paramount. I’ve seen some amazing things at the events. Don’t make the mistake of having your head down buried in your phone. You’re at an event that’s meant to connect human beings. Send your Tweet, check your email for sure – but don’t forget to pull you head up and make some eye contact. Nothing will be more welcomed to an introverted passer by.

4. Leverage technology to break the ice. Install the APP Banjo, or follow along with the conversation on Twitter by tracking a hashtag like #WDS3. Banjo will show you who’s nearby and what they’re saying on Twitter, Linkedin, and even Intagram. It’s great to track the sentiment of the event and discover new people. Tweeting to someone at the same event may be a nice low impact way of connecting.

5. Volunteer for the ridiculous. If speakers ask a question or for help on stage – volunteer! This doesn’t always happen, but when it has happened on our stage, attendees can’t stop talking about it. Nobody on stage at a conference wants to embarrass anyone. This isn’t a comedy club or magic act. They’re usually trying to make a simple point. If done well people will talk about the stunt for weeks afterward. Chances are you’ll get swarmed as you leave the stage.

6. Learn something new & expand your horizons. Attend a break out session that you wouldn’t attend. When I was first learning about social media, I attended the Web 2.0 conference in San Francisco. This was back in 2007 when I was a Vice President of Sales. I had no desire to be an entrepreneur but I pushed myself to attend breakout session about entrepreneurship. That’s the first time I met Michael Lazerow. Year’s later Mike started Buddy Media, and hired me in sales. Also, if you attend a session you’re not familiar with, chances are that you’ll have lots of questions too. You’ll want to interact with those in the audience with you or speak up during the session.

7. Seek out loners. Groups are hard to penetrate. But if you see that one person standing in the corner, now you can ask them about the last speaker on stage, those events happening in the news, or ask a question about the agenda that’s been irking you. If they don’t know, ask them to join you in the journey of discovery.

8. Turn your business card into a conversation piece. This past Spring while walking with my daughters at the Chappaqua Book Fair I encountered a business hero of mine, Simon Sinek. I stopped him to introduce myself and handed him my business card. He reached into his pocket and pulled out a silver token. He indicated that it was an actual token of appreciation for the compliments that I’d just given him. Wow. It had all the pertinent contact information on it, but it was so unique that I’m still talking about it. It doesn’t have to cost a lot to make a big impression.

9. Volunteer to work the event. You’ll be “in the know” and part of the inner circle of organizers. Anyone who’s launched a conference understands just how hard it is to pull off an event. You’ll have all access to speakers, sponsors, and the agenda. You’ll be able to attend the event for free. You’re certain to meet a whole new network of people you would have never encountered as an attendee.

10. Get there early. The people who get to events early always read the agenda, know where the bathrooms are and get the lay of the land. You’ll become a resource for other attendees. If you’re a resource for someone the law of reciprocity indicates that they’ll want to help you in some form at a later date.

11. Ask lots of questions. Have a few prepared in case you draw a blank. For example: since Dave is keynoting our event on May 14th, you may want to ask, “Have you ever read one of Dave Kerpen’s books before”?

12. Follow up. An appropriate follow up is essential. It will also help you reap the reward of all your hard work at the event. Nothing is more disheartening than spending time and money on an event and having nothing to show for it. You’re there to make connections. Send Linkedin connections during breaks for some down time. It will give you a chance to decompress on your own, and get something accomplished.

13. Hang out by the food. This sounds so silly, but if there is public area in the same general area as the food, camp out there. You’ll see everyone at the event. Staying put will serve you better than milling about. Have an anchor spot that you return to. You’ll see repeat strangers and it will make it easier to make eye contact, smile, and connect.

14. Everyone matters. Drop your agenda and embrace serendipity. It’s important to understand who’s at the event that you want to talk to. Sometimes the nervous looking gal in the corner is the most important person in the room. Maybe she’s the founder of a well-funded social network and she needs to hire someone just like you. Focus on being open, friendly, and helpful to those who you encounter. If you can do this genuinely, you won’t be soon forgotten.