Dave Kerpen | Wear Orange Shoes: The Simple Key to Networking That Nobody Talks About
16379
post-template-default,single,single-post,postid-16379,single-format-standard,ajax_fade,page_not_loaded,,qode-theme-ver-10.1.2,wpb-js-composer js-comp-ver-5.1,vc_responsive

Wear Orange Shoes: The Simple Key to Networking That Nobody Talks About 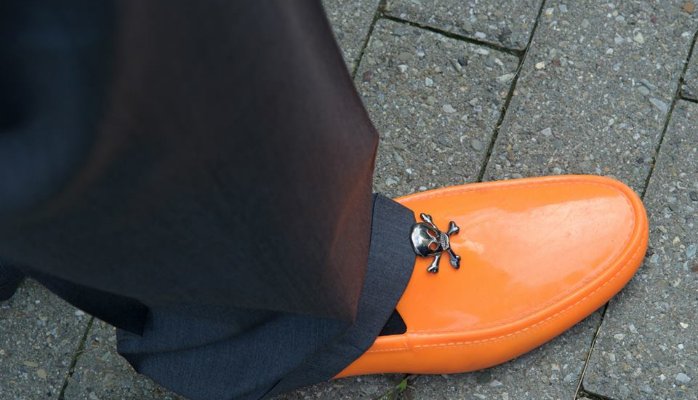 28 Apr Wear Orange Shoes: The Simple Key to Networking That Nobody Talks About

Posted at 19:25h in Uncategorized by Dave 0 Comments
2 Likes
Share

Frustrated, annoyed, and nearly ready to give up.

That was how I felt as I wandered around during the happy hour at the end of the Founders start-up event. I had attended in part to learn, and I had indeed learned a lot at the sessions all day. But my primary reason had been to meet people, including potential investors in my start-up.

In that objective I had come up short. There were dozens of investors in the room, but their time had been hoarded by other start-ups, and the one I managed to meet had brushed me off without really considering my pitch. But that was okay because there was really only one person I’d come to see: Dave McClure.

Dave McClure was the founding partner of 500 Startups, a well-respected start-up fund based in Silicon Valley with offices all over the world. I recently had received an all-important email introduction to Dave through Victoria Ransom, the cofounder of the Wildfire app (sold to Google) and a mutual friend, but thus far my email had gone unanswered. I knew Dave was at the event  because he had been one of the speakers that afternoon. This was my chance to connect with him in the flesh.

I stood in a room filled with entrepreneurs and investors, hoping to get the attention of just one. I was contemplating whether to get a drink from the bar, when all of a sudden I heard, “I have got to talk to the man wearing those f–king shoes!”

I looked up, and there was Dave McClure. Of the three hundred people in the room, the one I wanted to talk to the most was actually stopping to chat. Why? He had noticed my bright orange sneakers, and in a room filled with people dying to talk to him, my sneakers were the reason he had decided to initiate a conversation with me. This was my chance, and I wasn’t going to waste it.

“Hope they’re bright enough for you, Dave,” I replied jokingly, and proceeded to take the opportunity to remind him about the recent email introduction and tell him a bit more about our business. Within fifteen minutes he had introduced me to his New York partner, Shai Goldman, and we had set up a time for a follow-up meeting. A few weeks later, 500 Startups became a key investor in our tech start-up, Likeable Local.

Were my orange shoes the reason I secured an investment? Of course not. But they were the reason I got into a conversation in the first place.

In a room full of people trying to get busy people’s attention, that was all it took to stand out in the crowd.

The orange shoes I wore that day were the twenty-first pair I’ve owned, and I’m now up to twenty-nine pairs of orange sneakers and shoes. Not a day goes by that I don’t wear orange shoes. And it’s not just conferences where they make me stand out and create more opportunities to meet people. It’s in ordinary moments: on the train to and from work, at coffee shops, and in building lobbies. People walk up to me nearly every day, comment on the shoes, and begin a conversation. Some of those conversations lead to nothing, but others lead to exciting opportunities, real relationships, and connections with people who can add value to my life in some way. Without those shoes, I might have never met those people.

Of course, this doesn’t mean you should go out and purchase twenty-nine pairs of orange shoes (or any color shoes for that matter; shoes are expensive). But you have an opportunity to create a signature style that will help you stand out at conferences and elsewhere and give yourself an opportunity to meet more people.

Orange shoes are my thing, but yours can be anything; the only two criteria are that it be attention-grabbing and that it feel authentic to you. If it’s not shoes, is it a scarf? Earrings? A noticeable briefcase or tie? A watch, a hat, or a bracelet, perhaps?

What can your signature style be at conferences and beyond? How can you become more noticeable and not only stand out in a crowd but actually attract people to you?

Some people may dismiss this idea as silly. Some may not want to stand out like a sore thumb in a crowd. To them I say the following: You don’t need to look foolish to have a signature style. Even if your signature style doesn’t include bright, noticeable colors, if you’re consistent in your style, you’ll be much more likely to be remembered by the people you meet. Think about it this way: Why not gain any edge you can over everyone else in the room?