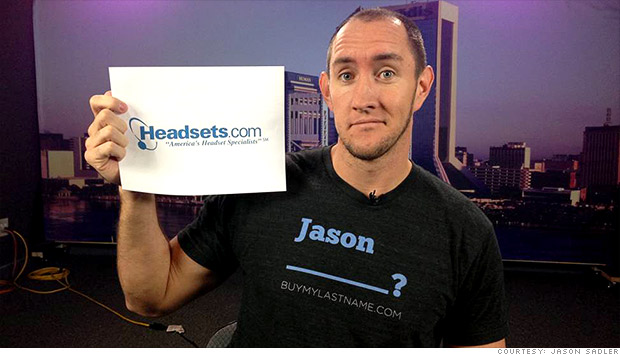 02 May Genius or Total Sellout? Creativity for Sale

Jason HeadsetsDotCom is selling his last name for the second and supposedly final time for 2014. At the beginning of next year, YOUR company can have a personal walking, talking, breathing, billboard. Everything will be changed: his driver’s license, his Facebook account, his twitter account, a new website with the new full name, the byline of his upcoming book, Creativity for Sale, and basically anywhere his name is seen or heard.

Is this man a creative genius or a total sellout? I spoke with him to find out more.

Last year, Jason sold his last name to Headsets.com for $45,000. He calculated a publicity impact of this creative marking to be worth $6 Million in earned media for Headsets.com. Knowing it was a success, Jason decided to sell his last name again for the 2nd, and supposedly last time.

While this is a bit controversial, I suppose I can’t be too opposed to this his sort of sponsored marketing because I too went on a similar creative path. As many of you know, instead of a traditional wedding, my wife Carrie and I decided to have a sponsored wedding in front of family, friends, and 5000 strangers at a Brooklyn Cyclones baseball game seven years ago. We raised $100,000 in sponsorships from vendors such as 1-800-Flowers.com, Smirnoff, After Hours & Entenmann’s and raised $20,000 for the Multiple Sclerosis Society. The Our Field of Dreams promotion generated about $20 million in earned media through coverage such as CBS Early Show, ABC World New Tonight, CNBC’s On The Money, the New York Times and hundreds of blogs. Because our vendors were so thrilled with all of their ROI, they asked us what we could do for them next. We couldn’t get married again, so we started our first company.

My sponsored wedding was not without its detractors and neither is what Jason is doing. “Some people don’t like it,” he told me.

In some people’s minds, he is viewed as “selling out” by using something so personal as his name to offer up for sale. However, that is not how Mr.Headsetsdotcom sees it. “Selling out is taking money for something that you don’t like doing. I love what I’m doing.” He sees it as a creative a fun way to build a brand, add value, and gain exposure. “ I’m doing something that really gets attention- there are people who are going to like it and not going to like it. That’s just how the world is.”

Currently, after over a dozen bids, the bidding for Jason’s name stands at $50,000 for a brand called SurfrApp. This social app allows you to document and share your surfing adventures by checking into surf spots and logging your surf sessions. However, bidding ends December 12th on buymylastname.com and starting in January, Jason’s name will be legally changed in the state of Florida for one full year.

Jason’s new book, Creativity for Sale will be available in mid-2014, telling the story of his inspiration experiences, including how he started his first human marketing project IWearYourShirt.com, and business advice. Of course, he is offering sponsorships and advertisements on all 200 pages of the book, as well as the front and back covers. So far, the book sponsorships are half sold already and the money being made is going towards his self publishing and marketing the book.

Mr. SponsoredLastName is clearly harnessing his creativity and openness for success. But how far would he go? I asked Jason if when it came down to it, when he has kids, would he sell his child’s name? He said that he would not sell it off. He wants his kids to have a normal upbringing and to keep their name sacred.

“But what if I offered you $100 Million for your child’s name, Likeable?”

Jason: “I would be happy to discuss that further at a later time.”

Now, I’d love to hear from YOU. Is Jason a genius or a sellout? Would you sponsor his last name or a page in his book? What would you allow a sponsor to own? Please let me know in the Comments section below, and please share this story with your network