This Incredible Story Shows the Power of Positive Thinking 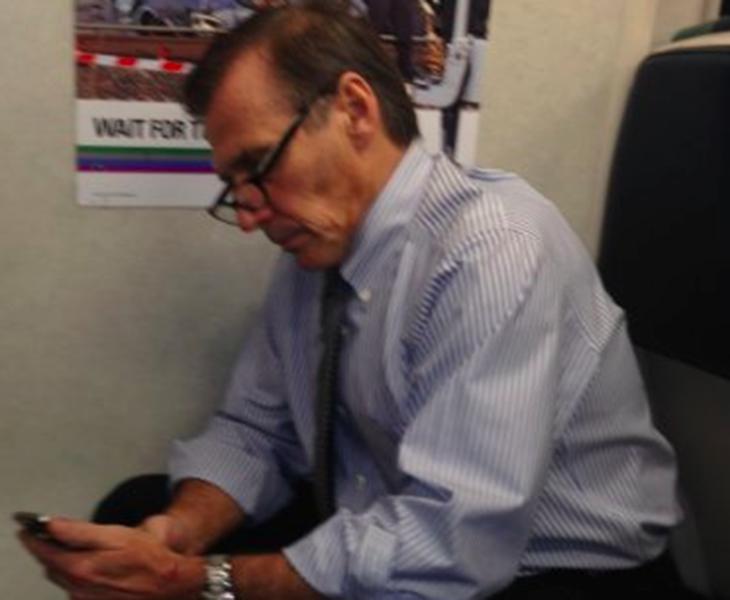 02 May This Incredible Story Shows the Power of Positive Thinking

It was 5:00 PM, the evening before a major snowstorm in New York this week, and tensions were running high as people boarded a packed Long Island Railroad train for the trip home. I was fortunate enough to snag a seat, and as the train pulled out of Penn Station, a well-dressed man sitting near me turned on what sounded like a podcast on his phone and began listening.

The only problem was, he wasn’t wearing headphones. Seconds later, dozens of people on this train were listening to a Rush Limbaugh rant.

Somebody playing loud music or talk radio on a train would upset nearly any commuter. But being forced to listen to conservative talk show host Rush Limbaugh, in New York City, during a blizzard- well, you can likely imagine the pandemonium that quickly ensued.

One man came over to the Limbaugh listener and yelled at him: “What the f—k is wrong with you? Shut it off!”

The man responded, “I’m trying too, you a—hole!”

But the loud radio continued. At this point, the voyeur and social media fan in me took over, and I snapped the photo above, and tweeted:

People tweeted back to me, and amongst other things, asked me to take a video, so I obliged. As I was filming this man, still listening to loud Limbaugh, he began talking to me. He was obviously upset that I was filming him, and he said he was trying to shut off his phone. I offered to help him, but he snapped back:

He continued with some personal insults I won’t repeat. Eventually, he shut off Limbaugh. Then, the attention on the train turned to the video, and what would become of it.

“I’ll tweet a link to it, check out Twitter.com/DaveKerpen,” I told people who asked me as they got off the train. The man got off at the stop before me, and 10 minutes later, I was home with my family.

I showed my wife the video, and told her the story. “You could definitely share the video,” she said. “It’s funny, and you don’t say anything bad on it. Then again, you were filming him, which isn’t very nice to begin with.”

Always the smarter one than I am, my wife had made a very good point. No matter the situation, it wasn’t a likeable thing to do to film this man on the train. I chose not to share the video, played with my kids instead, and later went to sleep, thinking that was the end of the story.

But the story was far from over. The next morning, I got two tweets from people on the train asking to see the video. One had just joined Twitter, and her first tweet was to me, about the video:

Then, the craziest thing happened: I received tweets from the man on the train, saying he was sorry for being rude, thanking me for not sharing the video, and saying he really just trying to shut off his phone, a new device he had just been given:

This man had obviously just joined Twitter, and his very first three tweets were about the loud Limbaugh listening!

I did some quick research on the man based on his Twitter handle, and it turns out he is a former New York City fire chief. The guy is a true hero – literally, a life saver, and yet dozens of people on the train and I were ready to condemn him when in fact he likely was truly just struggling to work a new electronic device. (We’ve all been there, haven’t we?). Heck, I was ready to condemn him to thousands, maybe millions of people by sharing the video I had taken of the incident.

I learned two important lessons from this situation:

My father-in-law, a high ranking New York state judge, once said to me when I was contemplating running for public office years ago, “Live your life as if a Daily News reporter is following you around at all times.”

While that’s not likely to actually happen, unless you’re Barack Obama reading this, the truth is, no matter who you are or where you are, you’re just one person’s smartphone-away from having your life shared with hundreds, thousands or even millions of people. I’m sure my father-in-law, if he were alive today, would agree, that this is a good an excuse as any to always do the right thing.

2) You never know everything about a situation. Try to keep a positive attitude and do the right thing, always.

The people on the train, including me, were convinced that his man was defiantly blasting his radio show. As it turns out, he had played it accidentally and was desperately trying to shut it off. I’m sure he felt further upset and out-of-sorts by the man who cursed him out and them even more upset by my filming him.

I clearly made a mistake to film Ed with my phone, and for that, I am sorry. I could have politely asked if perhaps I could help him shut off his phone, and perhaps, had anyone on the train done that, the whole situation could have been avoided.

My friend, the author, speaker, and happiness expert Srikumar Rao, teaches that since you never really know the full story, you might as well always choose happiness, choose a positive attitude, and choose to do the right thing.

Srikumar asks his audience to imagine driving home from work on a hot summer day and being stuck in a horrible traffic jam. The air conditioning in the car breaks, and then all of a sudden a car comes up from behind you and cuts you off. How would you feel and what would you do?

Most people, including me, would get angry. Some people might yell or swear at the offending driver.

Now, Srikumar follows, imagine that the driver who cut you off has just received a phone call from the hospital, a doctor told him his young child had been in an accident, was in critical condition, and he must get to the hospital as fast as possible.

Changes your attitude, and your actions, I bet?!

Srikumar’s point- and my point with my story, albeit a little less dramatic, is that you never know the exact circumstances of other people’s lives. So, if you don’t know, why not choose a positive, happy attitude, and helpful, likeable actions?

“I remember a mini-Paradigm Shift I experienced one Sunday morning on a subway in New York. People were sitting quietly — some reading newspapers, some lost in thought, some resting with their eyes closed. It was a calm, peaceful scene. Then suddenly, a man and his children entered the subway car. The children were so loud and rambunctious that instantly the whole climate changed.

The man sat down next to me and closed his eyes, apparently oblivious to the situation. The children were yelling back and forth, throwing things, even grabbing people’s papers. It was very disturbing. And yet, the man sitting next to me did nothing. It was difficult not to feel irritated. I could not believe that he could be so insensitive to let his children run wild like that and do nothing about it, taking no responsibility at all. It was easy to see that everyone else on the subway felt irritated, too.

So finally, with what I felt was unusual patience and restraint, I turned to him and said, “Sir, your children are really disturbing a lot of people. I wonder if you couldn’t control them a little more?”

The man lifted his gaze as if to come to a consciousness of the situation for the first time and said softly, ‘Oh, you’re right. I guess I should do something about it. We just came from the hospital where their mother died about an hour ago. I don’t know what to think, and I guess they don’t know how to handle it either.’

Can you imagine what I felt at that moment? My paradigm shifted. Suddenly I saw things differently, I felt differently, I behaved differently. My irritation vanished. I didn’t have to worry about controlling my attitude or my behavior; my heart was filled with the man’s pain. Feelings of sympathy and compassion flowed freely. “Your wife just died? Oh, I’m so sorry. Can you tell me about it? What can I do to help?”

Everything changed in an instant.”

Some situations are harder than others to be our best in, but that doesn’t meet we can’t always try to be at our best.

Ed, I’m sorry that those passengers and I weren’t at our best the other day, and I wish you many hours of happy listening to Rush Limbaugh- with headphones.