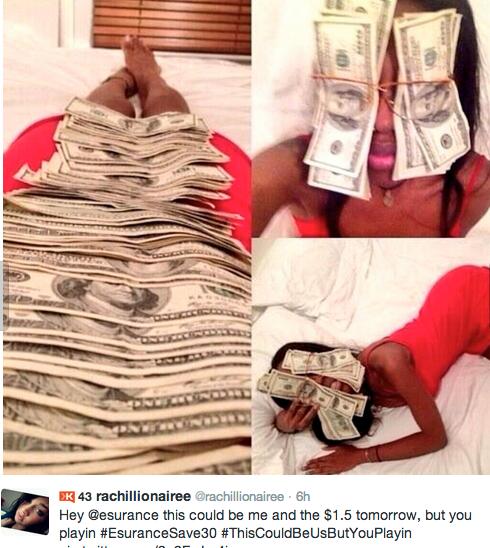 02 May Exclusive Interview: The Best Super Bowl Campaign in History

That’s the number of times Esurance has been seen online in less than 48 hours following the SuperBowl, the most viewed and talked about event of the year.

The most popular minute on Twitter SuperBowl Sunday night? The minute AFTER the game, when over 200,000 Esurance tweets were sent out. In. One. Minute.

Esurance has now had over 10 times as many tweets as Budweiser, the 2nd most talk-about brand at the Superbowl, who paid for 2 ads and spend over 3 times as much money.

How did they pull off this monumental feat? Esurance bought the first ad after the game, spending “just” $2.5 million on the ad, thereby saving $1.5 million off of the $4 million+ most advertisers spent per ad on the SuperBowl, or roughly 30% off. They then used the ad to announce a Twitter contest in which they are giving away the $1.5 million they saved to one lucky tweeter who used #esurancesave30:

The most talked about brand online and offline by far? Check.

This campaign is PURE GENIUS.

And it’s not over. The winner was just picked and will be announced on tomorrow night’s Jimmy Kimmel show.

This promotion will set the standard for integrated TV / social media campaigns for many years to come.

I talked with Esurance spokesperson Danny Miller last night about the epic promotion:

Dave: How many tweets were you hoping to get during the promotion? Followers? Web traffic? Leads?

Danny: We are very pleased with the results so far: More than 2.9 million #EsuranceSave30 tweets so far, the hashtag was the #1 Twitter trend in the United States for most of the day today, and more than 50 articles across a wide range of business, advertising, marketing, and consumer publications, from the Wall Street Journal, to Ad Age, MarketingLand and E! Online. We’ve seen a big spike in traffic to the Esurance website as well.

Dave: What are your overall goals for the promotion? How will you judge it to be a success?

Danny: There are more than 50 million people on Twitter in the US, and this campaign is a great way to connect with those people in a way that is relevant to Esurance as a modern brand. We think our promotion will make us one of the most talked about brands in the Super Bowl and build bigger awareness for Esurance. We also wanted to leave consumers with the impression that Esurance is fast, and efficient, which is why we chose Twitter for this campaign – the quickest, most modern form of communication out there. $1.5 million was how much Esurance saved by purchasing the first commercial AFTER the game, and we thought this would be a great way to pass those the savings on to consumers and make a bold statement to the 100 million-plus Super Bowl audience. This campaign transcends not only what Esurance has done on social media, but what any brand has ever done – the $1.5 million is the largest single amount of money ever given away on Twitter by any brand.
Dave: Do you think this will spur on similar promotions from companies? Would you do this again?

Danny: I can’t speak to what other brands may do. We’ve done many contests and giveaways on social media in the past, and we will continue to do so. I’m sure others will try to duplicate this effort in some form, similar to the way many brands responded to the “Oreo Moment” during last year’s Super Bowl.

Dave: Any other thoughts on the promotion?

Danny: Using Twitter for a campaign like this is a reflection of Esurance being the most modern and innovative insurance company in the industry. Everything that Esurance does in insurance is smart and agile, and we’re doing it again with this sweepstakes. We are using this effort to connect with consumers and build the Esurance brand and mindshare for Esurance as a faster, smarter, and more efficient insurance provider.

Dave: Thanks for joining me.

My senior editor, John Abell, chronicled the best and worst ads during the Super Bowl on LinkedIn here. As it turned out, the very best campaign this Super Bowl (and, in my humble opinion, in Super Bowl history) began the minute after the Super Bowl.